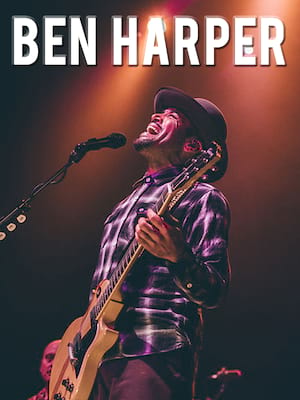 Three-time Grammy award winner Ben Harper is hitting the road! The singer-songwriter's blend of groove-laden funky soul and folky handcrafted acoustics helped him to gain cult status during the course of the 1990s and widespread attention toward the end of the decade. Harper combines elements of classic folk singers, blues revivalists, and jam bands and is embraced by critics and college kids alike. Harper's catalog sells consistently and he tours constantly, building a solid, dedicated fan base.

With over 14 albums to his name expect to hear tracks like "Steal My Kisses" and "Shine" as Ben Harper serenades you in this brand new tour!

Seen him 3x's outstanding each time. With Charlie MusselWhite this would... more

Sound good to you? Share this page on social media and let your friends know about Ben Harper at Burton Cummings Theatre.