Sorry! You missed The Strumbellas at Burton Cummings Theatre 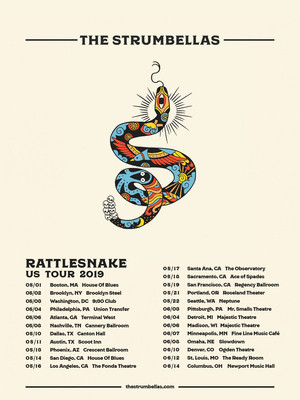 The band cues up a folksy, foot-stamping tune that builds momentum all the way up to a huge, happy singalong chorus

Why See The Strumbellas?

The Strumbellas Shake, Rattle(snake) and Roll!

Canadian indie pop rockers The Strumbellas formed in Toronto in 2008, centring their toe-tapping blend of folk, alt-country, pop and indie rock around the distinctive rebel howl of bearded frontman Simon Ward and his satisfying songwriting. After eight years and 500 live shows building their reputation as a cult hit, the sextet broke into the mainstream with their uplifting, chant-able summer anthem Spirits, which has amassed 150 million Spotify streams and almost 60 million Youtube views.

Evoking euphoria whenever they set foot on stage, The Strumbellas know a thing or two about putting on a blood-pumping live show. Throwing in copious amounts of soaring melodies, pulsing, dance-inducing grooves, much audience banter and a party atmosphere for good measure, their recipe for an electrifying gig is no trade secret.

Following the March 29th release of their fourth studio album, The Strumbellas hit the road on the Rattlesnake Tour.

Seen The Strumbellas? Loved it? Hated it?

Sound good to you? Share this page on social media and let your friends know about The Strumbellas at Burton Cummings Theatre.